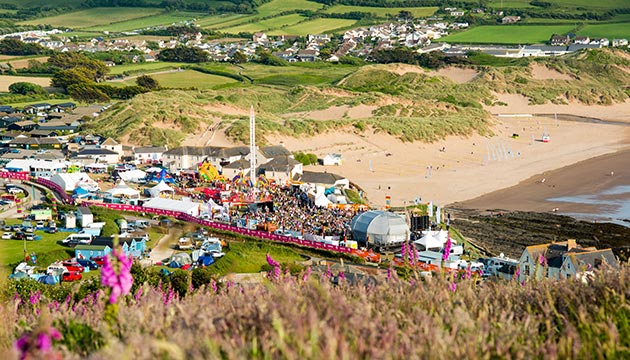 I spy the first weekend of summer and it looks like the festival flags are waving. Glastonbury is looming on the horizon, people, so I’ve selected some other quirky and colourful festivals happening around the UK this weekend to get you in the Glasto mood.

From a festival for dogs to a festival hot with balloons. Of course, if festivals aren’t your thing, try my Weekend Directory for alternative weekend inspiration and ideas incase you’re stuck for plans. Have a great one – I’ll be back next week.

It’s the oldest continually running film festival in the world and it’s back for another wonderful year. With a programme full of incredible events, including documentaries, retrospectives, shorts, panel discussions and educational workshops.

Plus, you’ll get the chance to watch a few high-profile premiers, such as Yesterday – a delightful musical comedy directed by Danny Boyle from a script by Richard Curtis. There’s even the chance to hear Danny Boyle talk about the movie at In Person: Danny Boyle.

DogFest returns to Ashton Court in Bristol this weekend for an action-packed two days. Bring your pet pooch and lap up a range of dog-friendly activities, including Flyball, agility training and obedience sessions, dog diving and dog competitions.

There is plenty to get human tails wagging too: Noel Fitzpatrick hosts ‘The Great Dog Walk’ twice a day, a chance for you to stretch your legs with your four-legged friend. There’s also live music, shopping and pampering sessions!

For the first time ever, Cheltenham plays host to its inaugural Balloon Festival on the 22nd and 23rd June. head to Cheltenham racecourse and expect hot air balloons galore, live entertainment (stunt show anyone?), fireworks, local traders, a giant funfair, food and drink stalls – and a whole lot more.

Festival | Summer by the River, London

Go city-side this weekend and you won’t be short of festival action: Summer by the River rolls out between London Bridge and Tower Bridge.

It’s the largest outdoor festival in London and is jam-packed with open-air events and activities, including outdoor cinema, workshops, comedy, galleries, quizzes and live music. Naturally, there’s also plenty to eat and drink with local artisan stalls. Best of all, it’s free!

North Devon is where you want to be this weekend if Craig David, Tom Odell and The Feeling float your boat.

This 3-day chilled-out music and surf festival is set in the beauty of Croyde Bay and features fabulous music, surf competitions, and wonderful food and drink. It’s a strictly no plastic event, so remember to pack accordingly!