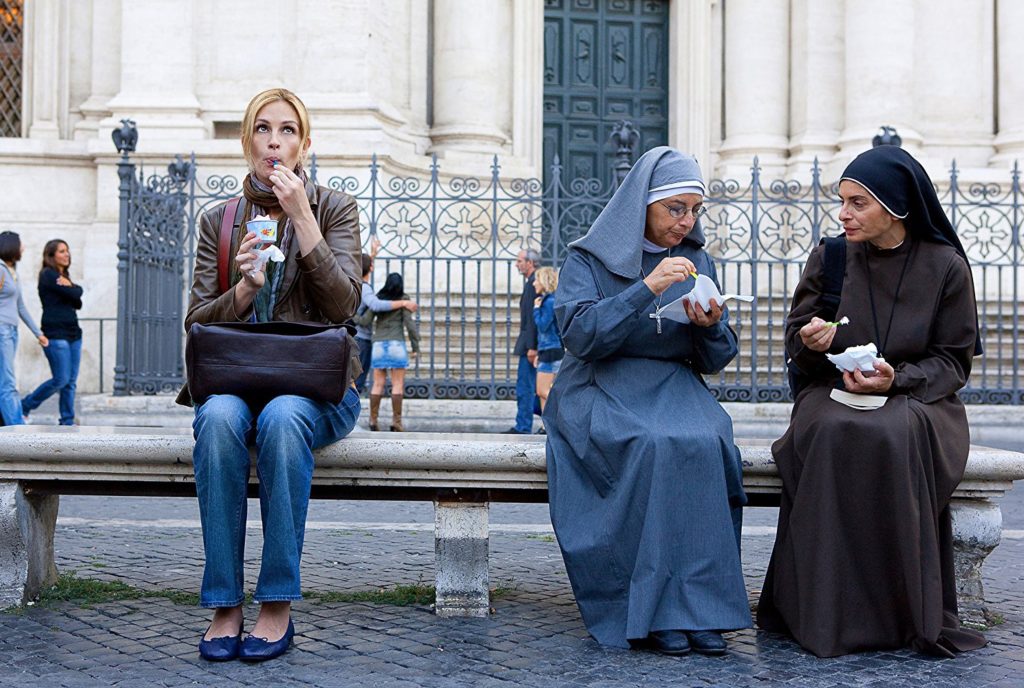 Now that travel has been put on ice for a while, how do you quench your thirst for escaping the here and now? Gin, is one option. The other, possibly more sensible thing to do, is indulge in a little armchair travel with a helping hand from Hollywood.

So we’ve selected 10 of our best travel movies to share with you and keep you horizons firmly widened. May they tickle your fancy until you fancy a real holiday – and are actually allowed one.

Just so you know, if you rent or buy one using the links below, we may earn an affiliate commission via Amazon.

Based on the bestselling memoir of Cheryl Strayed, Wild tells the story of Strayed’s solo 1,100-mile trek across the Pacific Crest Trail in the hope of coping with her mother’s death, her experimentation with heroin and her divorce.

Against the backdrop of the beautiful Golden Coast, with only a bulky backpack for company, this uplifting tale showcases life’s pleasures and hardships, as Cheryl (played by the brilliant Reese Witherspoon) embarks on a journey to heal and strengthen her lost soul.

Get set for sweeping rugged scenery and dramatic desert landscapes, and be prepared to crave a serious outside adventure.

Set in the early 1980s, amongst the sun-drenched setting of Crema Italy, Call Me By Your Name explores a tale of first love and awakening desire. The story centres around 17-year-old Elio (who lives with his parents in their summer villa in Northern Italy) and graduate student, Oliver, who is invited to come and stay with the family.

Little by little, romance bubbles to the surface between Elio and Oliver, as their timid friendship blossoms into an unbreakable bond; altering the lives of both boys forever.

With an Oscar-winning script, and based on the beautifully tender book by Andre Aciman, Call Me By Your Name evokes the splendour of an Italian summer filled with beauty and heartbreak.

Watch Call Me By Your Name
A Day in Florence

Roma follows the life of a young domestic worker (Cleo) as she helps middle-class parents, Antonio and Sofía, take care of their four children, against the setting of the Colonia Roma neighbourhood in Mexico City.

Directed by Alfonso Cuaron, Roma is an beautiful family drama that blends struggle, humour and tragedy whilst showing the political angst of the 1970s. Cuaron used his own childhood memories of his upbringing in Mexico to create this Oscar-winning semi-autobiographical story; it is, in fact, a love letter to the women who raised him.

Shot in entirely black and white, with no score, Roma moves viewers through an intensely personal portrayal of ordinary life and its wondrous depths, tears and absurdities. It’s a must-see.

Finding herself at a crossroad, Elizabeth Gilbert (played by Julia Roberts) sets out on a journey to reconnect with herself and discover what she truly wants out of life.

Assisted by the beauty of Bali, India and the incredible carbs on offer in Italy, Liz embarks on an uplifting, heartwarming and, at times, hilarious journey of self-discovery and romance.

Based on the autobiographical best-selling novel of the same name, this film shows the adventure and joy that comes with leaving your comfort zone. Plus, it’s peppered with mesmerising views and wonderful characters and is bursting with travel spirit.

Be warned, it will definitely leave you wanting your own sunny getaway – and Italian a lot of food.

In this raw and brutal version of the beloved Brontë novel, director Andrea Arnold leaves behind the stylised and polished versions of past versions of Wuthering Heights, stripping back the cliches and period drama.

What’s left? The real grit and almost primal take on the story and its themes of violence and class. Never has the novel been showcased or reimagined more savagely.

You’ll find yourself swept onto the haunting Yorkshire Moors, in all their real, desolate, yet gothically beautiful, toughness, alongside Cathy and Heathcliff. Their love affair with the nature that surrounds them and their hardscrabble existence is uniquely captured and utterly captivating to watch.

In a decision to deliberately break the retirement norms, a group of British retirees (Maggie Smith, Judi Dench and Bill Nighy) visit what they consider to be an affordable newly built hotel in India.

Much to their surprise, the Best Exotic Marigold Hotel does not live up to the plush and shiny standards that lured the group in the first place. Despite it not being quite what they imagined, the hotel and its exuberant and optimistic owner, Sonny Kapoorowner, soon work their charm.

What unfolds is a light-footed, cheerful human comedy – set against the vibrance and energy of India. It really is a gem of a movie.

Tall, dark and handsome, Gregory Peck stars alongside cinema royalty herself, Audrey Hepburn, in this timeless classic of love and fun in Rome.

As a young bored princess who is tired of living a sheltered life, Hepburn leaves behind her guardians and escapes to the Eternal City, just in time to meet American reporter, played by Peck. The story was reportedly based on the real-life Italian adventures of our very own princess, Margaret.

A modern fairytale, the film places you in the heat and thrill of Rome as the two love birds conduct their laugh-provoking affair. In it, Audrey Hepburn gives one of her most celebrated performances (it won her an Academy Award) in a captivating portrayal of a princess, whilst Peck is outstanding as the love-smitten reporter.

Shot entirely in Rome, it’s a must-see for anyone missing Italy’s capital.

Watch Now
Rome And Beyond

It is hard to resist the wit and satire of celebrated travel writer Bill Bryson – and in this film adaptation of his well-loved travel book, ‘A Walk in the Woods’, you can’t help but chuckle along.

The movie follows Bryson, (played by Robert Redford) as he decides to spend his retirement hiking the Appalachian Trail with his friend Stephen Katz (Nick Nolte).

Snapping up the opportunity of one last adventure before ‘it’s too late’, Bryson and his former friend discover the American countryside from Georgia to Maine, but both have very different ideas of ‘adventure.’

It’s a tickling movie looking at friendship, age and exploration – with some beautiful landscape along the way.

Starring Colin Farrell, Brendan Gleeson and Ralph Fiennes, In Bruges is a British gangster movie full of black comedy set in the medieval streets of the much-love Belgian city.

After their last mission didn’t go according to plan, hitmen Ray and Ken hide out in Bruges hoping for some peace and quiet until things calm down. What follows is a hilarious mix of laughs, twists and thrills about the relationship of the two men and their violent career choice.

Smart and genius, the film’s other star is the 12th-century canals and pebbly streets that make Bruges so popular. It’s the perfect incongruous backdrop for a truly brilliant gangster noir.

Once Upon a Time in Hollywood is Quentin Tarantino’s love letter to moviemaking and is a golden piece of cinema celebrating art, life and music in pre-Manson LA.

This historically-based comedy-drama follows the fictional lives of washed-out Hollywood actor, Rick (played by Leonardo DiCaprio) and his stunt double, Cliff (played by Brad Pitt), as they try to recapture fame and success.

With an equal dosage of disturb and dazzle, Tarantino mixes fact with fiction to capture the moment 1960s Hollywood changed forever. Brad Pitt and Leonardo Dicaprio star side-by-side (inhaler, quickly) and are utterly brilliant as an on-screen duo.

Swimming with sun-baked scenes of LA in its heyday and the musical vibe of the era, One Upon A Time in Hollywood is a worthy Oscar-winning film.

I really enjoyed Wild. Brilliant movie. And Once Upon a time in Hollywood is definitely one of those films I had to watch again and enjoyed it much more the second time. There's a few I've not watched so thanks! I'll seek them out.

No problem! Yes, I LOVE Once Upon a Time! What a movie!